I am uploading all of my mods to the following link:

Any remaining mods that aren’t already mirrored elsewhere will be uploaded to other sites over the coming weeks.

NZdawghaus has very kindly been uploading mods lost in the Elricm/PES closures/archives to Morrowind Modding History, and I’ve updated the links here from his list, but if you spot any dead links, please let me know and I’ll try to find other homes for them.

NB just googling the mod will usually bring up alternative download links, mostly at softpedia, though I haven’t tested those links.

If you’re looking for the little Proboards forum I used to run, it’s now been closed since it was simply duplicating conversations held on other social networks. Like many private forums, it was slow-moving and little-used, so I made the decision to close it to maintain more active discussions elsewhere.

To find a small, friendly place to talk about Elder Scrolls modding, why not head on over to Skyrim Real Estate? I will, of course, be active there, posting threads about my releases and contributing to discussions on other people’s mods.

To those of you who made the five or so years of Princess Stomper’s Lounge a pleasure, thank you! Thanks also to Lady Rae, Kateri, Tommy Khajiit, Qarl and others who helped me set the forum up and keep it running smoothly throughout its duration.

I received an email from a user saying that the Calvus & Rerlas mod for Morrowind had some sort of issue or conflict whereby Helseth thinks that Calvus is still with you, even if you’ve left him outside, when you go to fight Karrod.

Because I couldn’t find whatever was causing this – Helseth’s dialogue was filtered correctly – I added a result to Helseth’s line whereby when he tells you to leave Calvus outside, it switches the variable MercenaryNear to 0.

Of course, this takes no account of whether the mercenary is with you or not, so the more unscrupulous player could theoretically bring Calvus into the fight – but better that than have the player permanently unable to fight the king’s champion or remove the line and risk the player inadvertently cheating in the match. I’ll just have to rely on your honesty for that one. I’ve done the same for Calvia and included both .esp files in the updated file which is up at Planet Elder Scrolls.

Now that the user has confirmed that the fix works, it’s safe to upload this to other sites – I’m sure I’ll get around to mirroring this at some point, but feel free to do so if so inclined (remembering that you’d be responsible for it if I update it again).

Talking of which, I was notified today that Softpedia have uploaded some of my mods to their site, but thus far they appear to be some of my smaller Oblivion mods. I’ll admit that I’m not terribly familiar with their site, so I’ll take it as a reminder to have a look and see what treats I can find.

Just a couple of small tweaks – beds and chairs in the manor are now Persistent, which should help companions find them more easily. I’ve also shifted the curtains around, which should help those using the See You Sleep mod as well as widen the choice of companion beds from four to six. There are only two functional chairs in both dining areas.

I’ve increased the robot’s Intelligence to 10 in A Repair Bot, as Intelligence governs the repair skill. This should theoretically increase the robot’s repair ability. The old version is still available (both files at same link) for those who prefer the robot to be underpowered. 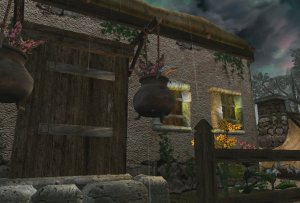 Well, I figured that rather than continue to sit on it, I’ve uploaded version 2.0 of Homes To Let. I’ve not tested it, because I don’t play Morrowind any more, but figured that if you wanted to play with it or tweak it or frankly do whatever you want to do with it, you should have the opportunity to do so. Download it from Planet Elder Scrolls.