Broken download link? Most of my mods are backed up here: http://www.4shared.com/u/x8emlqYc/princess_stomper.html

All my Morrowind mods are at Morrowind Modding History

I was playing Morrowind on a very low-end device and didn’t think that it would be able to handle Korana’s amazing Ascadian Rose Cottage mod, so I thought I’d make my own ‘eight-bit tribute’ – a really small, simple mod with no external resources that takes a few ideas from Korana’s classic but was knocked up in a day or two (so don’t expect Abu Manor!).

It’s more-or-less where Ascadian Rose Cottage is – just on the edge of the lake near Pelagiad. The mods probably conflict, so if you can run Korana’s mod, use that one instead. It’s a four-bedroom cottage with fast travel to/from Balmora, a library, pool, and alchemy tower.

END_OF_DOCUMENT_TOKEN_TO_BE_REPLACED 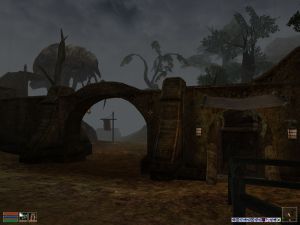 Q: What is it?
A: It’s a house. Well, an apartment, if you like, but there’s an upstairs (the bit where you walk in) and a downstairs (presumably, underground). The upstairs bit has a kitcheny bit and a dining bit, and the downstairs bit has a bedroomy bit (bunk) and a shower.

Q: Where’s the toilet?
A: There isn’t one. This is Balmora: you can poop in the bucket like everyone else.

Q: How come I can just walk right in and take this swank crib?
A: It belonged to your uncle* – you remember him? Adventuring Uncle Garas, who travelled all over Tamriel (until that thing with his knee). Consider this compensation for putting up with his rambling about “those immigrants” after too many sujammas on New Life Eve. He left you a note.

Q: Why is there a master’s alchemy set in the bedroom?
A: You own a two-floor apartment in the heart of the city; I think you can afford a fancy chemistry set.

Q: If this house was owned by a grumpy old codger, why are there so many ‘feminine’ touches?
A: That was the housekeeper, Alys. She ran off with a guar-herder. It was properly scandalous.

Q: There’s a ruddy great rock outside the front door!
A: That’s been moved in the mod, but other mods might put it back. Just press ` to open the console, click on the rock and type
disable
then press return and then ` to close the console. Rock now gone. You may have to hop over the now-invisible rock, but at least it’s not blocking the door. (NB: you will only have to do this once; the collision will be gone the next time you load the cell.)

Q: Why is it called Strider-Side Cottage?
A: You can get a magnificent view of the silt strider when you’re hopping over the invisible rock that was previously blocking your front door.

Q: Is it compatible with NOM?
A: The shower has an nom_well_water script placeholder. If drinking from showers is your ‘thing’.

Q: Why di-
A: The wizards did it. The answer to any of your other questions is ‘wizards’.

Permissions: Feel free to upload/translate/incorporate into your own mod, don’t try to sell it, please credit me for my part.
Contact: (see readme)

3-bedroom house just outside Anga’s Mill (to the north-west), due west of Windhelm.

A medium-sized 3-bed house near Windhelm

Location:
Just north-west of Anga’s Mill, due west of Windhelm

END_OF_DOCUMENT_TOKEN_TO_BE_REPLACED

A simple extension to the player home in Solitude.

Location:
Proudspire Manor, Solitude (new doorway to the left inside the hallway when entering at street level)

Cost:
Free. (Assuming you have bought the regular player house.)

END_OF_DOCUMENT_TOKEN_TO_BE_REPLACED

Description
===========
Small, simple mod that adds a ‘nanny’ to each player-owned house in Skyrim/Hearthfire (not the other DLCs). This is so that I can take e.g. Lydia out questing with me without worrying about who can look after the children.

Some of the nannies are young and beautiful, others are old and wizened. They’re all female – not that I have any doubt that male nannies make excellent carers, but I just wanted it that way in my game. Each of the nannies is ‘protected’ – they can be killed by the player, but not by anyone else, to protect them from bandit invasions.

If you don’t have children in every home (i.e. with a multiple-adoption mod), you can roleplay them as being cleaners or housemaids. They have no conversation, and just a simple sandbox schedule.

Install
=======
1. Extract the files to a temporary location.
2. Copy files to (install folder)\Skyrim\Data\ 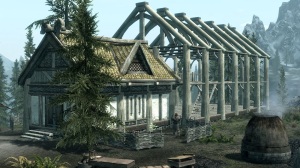 A new version of Hearthfire Cheat Chests is now available, which changes the chests into magical doors to a warehouse filled with the materials to build your houses.

The sawn logs were previously not appearing because they were not set to ‘playable’. I have now made this change, which of course changes the properties of the item. You will end up with more materials than you need, but you can just dump them back in the warehouse (or sell them!) 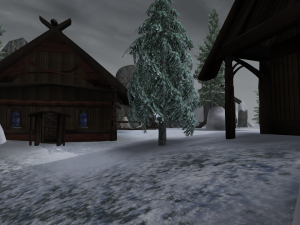 by Lucevar – original by Princess Stomper

Solstheim: Tomb of the Snow Prince is a massive overhaul for the island of Solstheim that adds a massive amount of atmosphere and incentive to explore the island, including expanding Fort Frostmoth into a small village that could reasonably sustain itself. Unfortunately, it doesn’t do the same to Thirsk, and the massive landscape changes mean that it’s incompatible with other mods that change Thirsk.

So I went ahead and made Princess Stomper’s Thirsk Expanded compatible with STOTSP, with kind permission from both modders to post the patch here on the Nexus. The layout of the village is different to the original to accommodate the different landscape and I’ve added a few trees here and there, but the work is almost entirely Princess Stomper’s – I haven’t changed the interiors at all.

Place the .esp file in your Data Files and make sure you also have Solstheim: Tomb of the Snow Prince installed. Use this instead of Princess Stomper’s original esp file. Bad things will happen if you use both together or try to use it without STOTSP active.

Small, simple two-bedroomed house in Solitude. The rear clings to the outer wall “like a barnacle” and has spectacular views of the docks.

Expands and improves the settlement at Raven Rock:

**One well cluttered, looks “lived in”
**One sparsely furnished for you to decorate yourself
Both are free to own and have plenty of storage, enchanting/alchemy stations, etc.

* Improvements to tavern, with new NPCs and furniture

END_OF_DOCUMENT_TOKEN_TO_BE_REPLACED

A while back, I started to make a mod for Morrowind called Better Tribunal MQ which would have allowed the player to meet Sotha Sil (thanks to Arcimaestro Antares’s fab model), but got lost in the worlds of Oblivion and Fallout 3 and gave up halfway through. Ostar picked it up and worked it into his Less Generic NPCs mod, to which I had contributed a few bits in the past.